I don’t think I’ve shared this experience of mine with any of you because for a long time I debated whether or not it was worthwhile to share. Some realizations are best kept to oneself.

Yesterday I read a couple of comments from Dave Eby’s townhall in point gray area in Vancouver, BC, my hometown which made me rethink. So here it is. I’ll mention the specific comments after I describe my experience.

Last January I was in New York for few days. There was a cold wave sweeping the entire east coast and days were sub zero. One evening after dinner, I decided to take a walk across the city to soak in the night time New York. I walk a lot when I visit Manhattan and it’s my way to be part of this wonderful town. It was around 11 pm and very very chilly. I was dressed warmly yet, I was freezing. I could barely keep my hands out of my pocket even though I was wearing gloves. I walked briskly going south west from 6th and 45th or so. The idea was that I hop over Times Square, see the night time energy of tourists and then hop into the subway on my way to Brooklyn where a cozy bed and a warm room were waiting for me. If I wanted, I could take a detour and hop into one of those bars in the lower east side and get a drink.

As I walked in the dark, suddenly something moved near the side of the pavement. I was startled and stopped to take a look. I realized it was one of the homeless persons, covered under the tarps trying to spend the night on the pavement. The mere realization shocked me. Here I was freezing to death even when dressed warmly and walking briskly. I had the comfort knowing that the moment I stepped into the subway, I’ll be back in my familiar neighbourhood, a warm home and a cozy bed. This person had nothing but a tarp around him and a whole chilly night ahead of him. What choices did this person have? Not many because I bet if he had any choice at all, he would not chose to spend the freezing night alone on the roadside under a tarp. What would I have done if I were him? I had no idea and I’m lucky that so far life hasn’t tested me by putting me in that position. Life can always be worse and we should be humble and grateful for what we have. We should be compassionate towards others. In a judgemental and prejudiced world, people often get judged by the decisions they make, the work they do. A familiar scene comes to mind from Les Miserables. A young boy out of sheer hunger steals a bread and then for the entirety of this life get stamped as a thief. Who cares to find out under what circumstances did he steal the bread? No one. It’s easy to judge. Harder, much harder to know the truth. We never really know the full story.

Yesterday, at Dave Eby’s townhall, some people protested the extra school tax by saying that they too were “victims of money laundering and speculative activities around realstate”. Victims when you have property worth 4 mil? Did you care or protest when realstate speculation was rampant ? You can sell your home and overnight you’ll be cash rich by few millions. Think about the choices you might have. Many others will not have those choices. If you want to really see the victims, go and spend some time around the tent cities that have stated popping up. Spend some time talking to struggling families and try to understand their difficulties. Try to understand how renters are struggling and working hard to afford a tiny place for living. If you did that you’d probably get some perspective. To quote a suffering renter,

seriously??? A couple of thousand A YEAR extra is going to displace someone??? We were given notice to vacate earlier this year. We had planned on staying there until our kids finished university which we were given every indication would happen.

You want to know how much our rent jumped? $1100 A MONTH. That’s right $1100 A MONTH. We don’t get to defer, when we complained about rent prices we were told “If you can’t afford it here then you should move”, by some of the very people angry about their $2000 A YEAR in taxes, which they can defer.

The hypocrisy is breath taking.

They can’t afford to live here anymore then they should move.

The double standard in Vancouver is disgusting. The message you get is

‘If you own a home you are smart,worked hard, are a good person. If you rent you are an idiot, white trash and get what you deserve’

I’m sorry,but I have no sympathy

These people certainly need some perspectives. It’s shocking how wealth robs people of their humanity, their compassion. 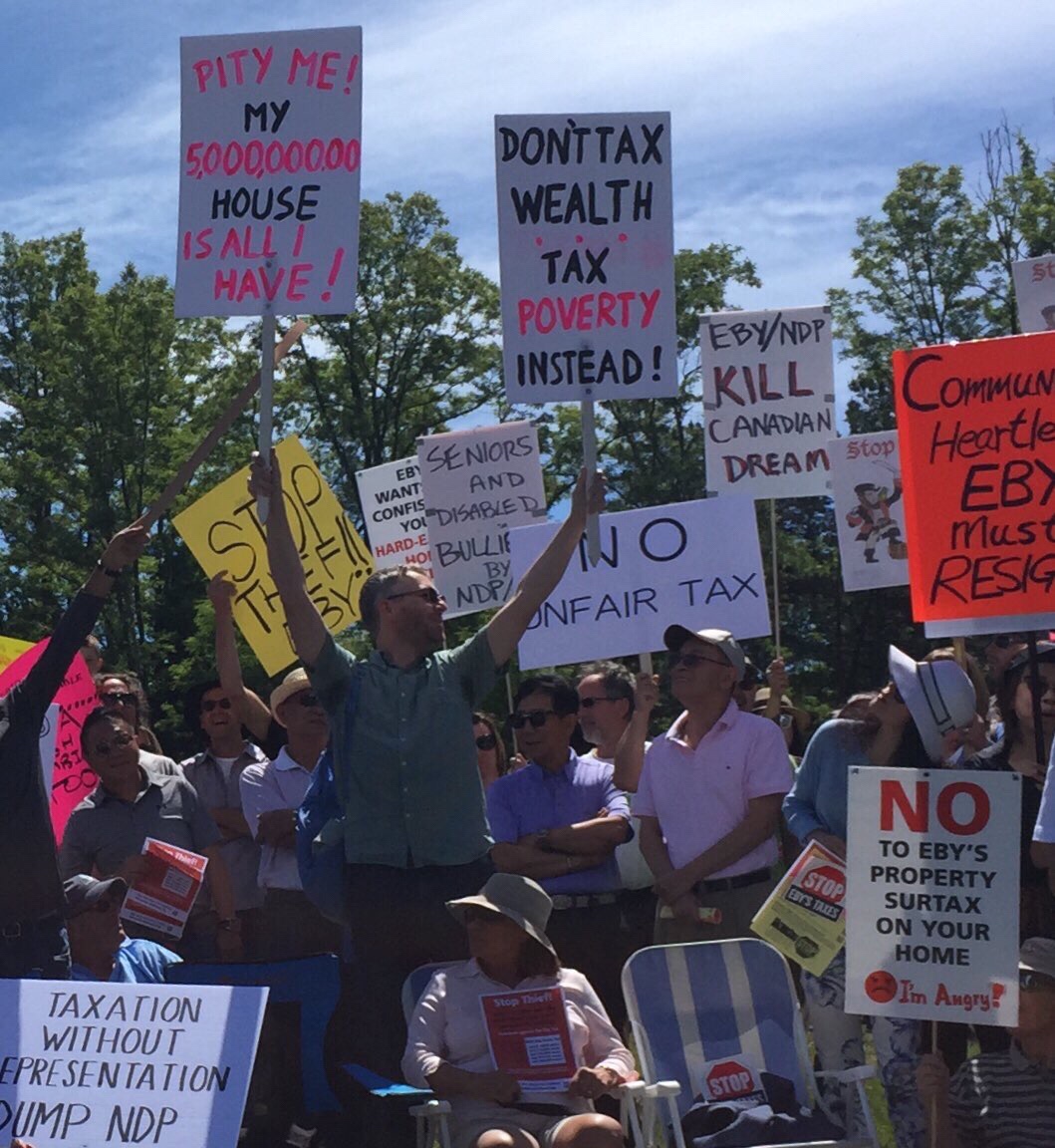 Mr. Wolfgang Tolkien (twitter @wtolkien) above is perhaps trying to give the same perspective to these wealthy homeowners.